Strengths and weaknesses of current approach

Agriculture, as practised in most of the industrial world including Canada, has largely been a force reducing biodiversity and threatening wildlife. As we elaborate below, agriculture is a significant contributor to species decline. This has happened as a result of numerous activities (see Get Started, Problems, Biodiversity Loss).

Also important are the effects of wildlife on agriculture and food system functions. Domesticated animals and honey bees (themselves exotic introductions) are often subject to predation.  Wildlife can also be reservoirs of disease and weeds that spread to domesticated animals or crops. Wildlife can also consume, damage or contaminate crops. Production infrastructure, such as fencing and water bodies, can be damaged.

Ultimately the question is how to organize the food system to be both productive and less disruptive of biodiversity and wildlife.  At the moment we haven't got the balance right in part because actions are spread across a range of actors, in part because many actions are not well targeted to the most serious problems and inadequate, in part because our information base is limited. But it is well established in the literature that ecological production systems, such as organic can increase biodiversity (cf. a meta review in Tuck et al., 2014).  There's also evidence that conventional farming is inefficient, occupying landscapes and soils that are better left for biodiversity and that this can be done without sacrificing landscape level production (cf. Redhead et al., 2022). Because Canada has a weak history of landscape-level management (see Goal 2), decision-making is highly fragmented. As it relates to farming, there are three spaces that need discussion:

Although interconnected with individual farm and fishery management, the focus of this change area is primarily the relationship between agricultural and aquatic spaces at the landscape or waterscape level, and habitat and wildlife protection.  Other parts of Goal 5 also address issues of biodiversity, as well as sections of Goal 4.

Venter et al. (2006) completed the first national inventory of 488 species at risk (SAR) in Canada, identifying six major categories of threats to biodiversity which included habitat loss, over-exploitation, native species interactions, natural causes, pollution, and introduced species. In 2018 this research was updated to include 814 SAR and a seventh threat; climate change (Woo-Durand et al., 2020). This landmark study and its follow-up revealed that the most significant threat, affecting 82% of all species in Canada, is habitat loss, followed by over-exploitation (47%) and introduced species (46%). It is also of note that the follow-up study found SAR are facing more threats in combination than before, and that climate change, although only a threat to 13% of species now, is expected to affect a greater proportion in the coming years (Woo-Durand et al., 2020).

Using Canada’s Species at Risk (SAR) Public Registry, Halvorson has analyzed species at risk threatened by food systems. 845 species, subspecies, or designated units that were identified at-risk (the COSEWIC designations extinct, extirpated, endangered, threatened, and special concern) were included in this investigation. Each SAR’s COSEWIC status report (or recovery strategy if the report was unavailable) was examined to determine if any of their threats were related to food systems (see summary in Table 1). SAR were included whether the threat was current or historical, as well as if the threat was suspected but not yet confirmed because of lack of data. The severity of the threat from food systems was not considered in this analysis, just the presence or lack thereof. This data was current as of November 2021, but for the latest information on any SAR refer back to the registry as information is updated regularly.

Agriculture, fishing, subsistence hunting and harvesting, all integral parts of Canadian food systems, are contributors to the seven major threats to biodiversity in complex and compounding ways. For instance, agriculture causes habitat loss as landscapes are converted to crop or ranch lands, or as management practises intensify and push previously adapted species out. It contributes to local pollution in the form of agricultural waste in surrounding streams and rivers, resulting in the nutrient-loading and eutrophication of watersheds, or through agri-chemical use (e.g., fertilizers, pesticides, veterinary products), which can remain and concentrate in the environment long after application. Invasive species are known to thrive and capitalize in these altered landscapes and conditions, out-competing and further threatening native species. Agriculture is also responsible for 8% of total greenhouse gas emissions in Canada, which contributes to climate change (Environment and Climate Change Canada, 2021) and the entire food system is likely responsible for around 30% of emissions (see Get Started, Problems, Environment, GHG emissions). These examples demonstrate how the seven major threats to biodiversity are multi-faceted, of which practices in food systems can be subcategories.

As of 2021, of the 845 species, subspecies, or designated units (DU) of species considered at-risk in Canada, 431 or 51% of SAR were found to be threatened by agriculture, fishing, or subsistence hunting/harvesting practices. The top 3 taxonomic groups most affected by food system practices were marine mammals (79%), reptiles (73%), and birds (71%) while lichens (13%), vascular plants (24%), and mosses (27%) were the least affected (Table 2). Agriculture and its associated practices are the most common food system activity endangering SAR, affecting 65% of the species threatened by food systems, or 33% of all Canadian species at risk (Table 3). Agriculture is the greatest threat in all regions, but some more than others (Figure 1); in the prairies 85% of SAR are affected by agriculture. Fishing affects its greatest proportion of species in the Maritimes and Atlantic Ocean region (39%), while hunting and harvesting is its most prominent in Quebec (20%), the Territories and Arctic Ocean regions (22%) (Figure 1). Hunting and harvesting is a complicated threat category, as it is most often listed in species that are important for subsistence in Indigenous communities. While species like the Atlantic walrus, caribou, and orca have been sustainably hunted by these communities for much longer than they have been at risk, and loss of suitable habitat and climate change are their main threats, hunting is noted to contribute to a reduced population.

A detailed analysis behind this summary table can be found here. 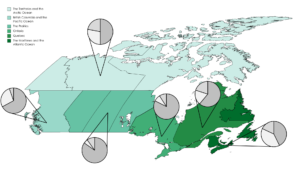 Figure 1: Regional breakdown of food system threats across Canada. Divided into six regions, the proportion of SAR within the region threatened by each food system is shown in the pie charts. Agriculture = dark grey, Hunting/Harvesting = medium grey, Fishing = off-white.

In a few cases, food system activities can be positive for a species' survival. For example, both the Poweshiek skipperling and western blue flag benefit from domestic livestock grazing as it mimics the natural disturbances that are essential in maintaining prairie ecosystems and preventing ecological succession. For the American badger jeffersonii subspecies and the American bumble bee, agriculture was originally beneficial in converting forests and wetlands to habitats more similar to their preferred ecosystems, but the increasing use of intensive agricultural practices in recent years has created a new threat. These examples demonstrate how food systems and the protection of SAR need not be mutually exclusive or antagonistic, and that future management practices should and must consider this larger scope.

For more detailed information, the full dataset can be accessed here.

As with so many other areas, NGOs and communities have attempted to fill gaps in government responses, sometimes acting independently, sometimes collaborating with government units. Their efforts have often been very significant. Individual farmers have worked to create habitat for wildlife, often supported by NGOs such as Ducks Unlimited, the Nature Conservancy, Birds Canada, Nature Saskatchewan, provincial Wildlife Federations, Ontario Nature or World Wildlife Fund (WWF).  There is some evidence that wildlife protections can be accelerated when farmers feel well supported by such third party organizations (Bélanger et al., 2021). Some sensitive agricultural landscapes are now covered under conservation easements and land trusts (see also Goal 3 Reducing Corporate Concentration, Substitution, Land). Federal, provincial governments or their paragovernmental agencies have often played a significant role in such projects, providing scientific analysis, facilitating relationships, and delivering matching funds.

DU claims to have influenced conservation on 200 million ac, restored 6.5 million, mostly wetlands, with much of their work with farmers.  The Nature Conservancy claims to have conserved 2 million ha, with another 12 million protected by partners that NC has supported.  They state that 231 species at risk exist on their protected properties.

On a more reactive basis, NGOs have taken legal action in an attempt to force governments to live up to their commitments.  Two prominent examples highlighted by Pitman (2019) are the Alberta Wilderness Association v. Minister of Environment, 2009 FC 710, for the greater sage-grouse, and the Environmental Defence Canada v. Minister of Fisheries and Oceans, 2009 FC 878 for the Nooksack dace over concern that the recovery strategies identified insufficient critical habitat. Both cases hinged on government claims that it didn't have the data to identify and protect critical habitat, an assertion that the courts partially or fully rejected. A critique of SARA, that the law is limited to government land and that governments are extremely reluctant to impose conditions on private landowners, plays out in some court cases. These successes in the courts do not, however, necessarily result in significant victories on the ground and these are time-consuming and expensive efforts. At least in the sage-grouse case, the saga continued due to legal contestation by the oil and gas industry until 2022.

Biodiversity and wildlife conservation have significant costs, but a long series of misdirected and half-informed have-measures are driving them up and hindering the transition. There are also significant costs associated with inaction. The federal government estimated in 2004 that a small number of invasive species were costing tens of billions annually (An IAS strategy for Canada). The cost to agriculture alone has been estimated at $2.2 billion annually (Canadian Food Inspection Agency, 2008). Most agricultural weeds are alien species.

The ultimate and unanswerable question at this point is whether the reduction in certain extractive activities to protect biodiversity will cost more than the current costs of biodiversity decline and invasive alien species? Although methodologically complex, the value of ecosystem services in Canada is estimated at $3.6 trillion (IPBES, 2018). What is less clear is how overall biodiversity loss associated with the food system will reduce those contributions to the economic vitality of the country and quality of life. This is an area where wholesale shifts in our economic structures to ecological economics (cf. Victor, 2009) are essential for financing the transition.